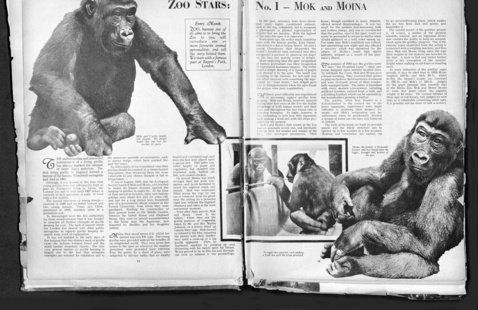 CU Denver Building, 2nd Floor - Main Gallery View map
Add to calendar
Save to Google Calendar Save to iCal Save to Outlook

Title: The Nature of the Beast

Description: A pair of gorillas abducted from the Congo named Mok and Moina were two of the earliest residents of modern architecture in England. Although they were considered a novel attraction, most of the attention that accompanied their arrival was directed towards the modern house that was built for them. Commissioned by the Zoological Society of London (ZSL), the Gorilla House (1932-33) by Tecton was considered a marvel of innovative design and technological advancement that far surpassed any building that had been built in England. For Peter Chalmers Mitchell, the commissioning Secretary of the ZSL, the London Zoo’s displays of living tokens of the British Empire attested to Britain’s colonial supremacy and the rigors of British techno-science. But for the evolutionary biologist Julian Huxley, Mitchell’s successor, the placement of modern architecture as a space for animal domestication was sociobiological in its constitution. Since the biological difference between gorillas and humans was one of degree, and not type, the house was a stage for a eugenic experiment based on environmental adaptation, which presumed that the reform of these non-human primates as surrogates for “savage man” could be applied to the “more advanced” British citizenry. While it may appear that the zoo grounds provided an unlikely canvas for modern architectural expression, the lecture explores the pressures that prompted the display of Mok and Moina’s exotic wildness in the most “civilized”, modernized, and troubling circumstances of captivity.

Biography: Esther Choi is an artist and architectural historian based in New York. Through her multidisciplinary practice and academic scholarship, her work explores the design and abstraction of nature, the cultural and environmental politics of worldmaking, and the intersections between art, design, and the biological sciences. In 2020, she founded Office Hours, an artist-run project which cultivates the sharing of liberatory worldmaking knowledge amongst artists, designers, scholars, and storytellers who identify as Black, Indigenous, and People of Color. She has received grants and fellowships for her work from the The Ford Foundation, Getty Foundation, American Council of Learned Societies, Richard Rogers Fellowship, Graham Foundation, and Canada Council for the Arts, among others. Choi is the creator of the artist's book Le Corbuffet (Prestel, 2019) and coeditor of Architecture At the Edge of Everything Else (MIT Press, 2010) and Architecture Is All Over (Columbia U, 2017). Her writing has been published in Artforum, E-Flux Architecture, Art Papers, Journal of Architectural Education, Architectural Review, and SSENSE. She is a 2022 Getty/ ACLS Postdoctoral Fellow and an Adjunct Associate Professor at The Cooper Union.

The College of Architecture and Planning organizes a series of lectures and events that highlight the challenges and opportunities of our present. Hosting leaders and visionaries from around the world, we believe that the creative work and dialogue happening inside our walls will help to shape the future. Free and open to all, we invite you to be a part of the diverse and exciting set of discussions that we are having.